As our harvest comes to a close in the coming days, we thought it would be a good time to reflect back over the past few weeks and to let you all know how it went!

After three unimaginably great years in a row, 2021 was always going to have a steep mountain to climb in terms of upstaging recent vintages, and typically things got off to a worrying start.

Spring this year was dry but very cold, and a lot of northern European wine making countries, including the UK, were hit by severe frosts just around bud burst in April. One small benefit of being right on the upper limits of where it's possible to successfully ripen wine grapes is that the yearly life cycle of our vines is a couple of weeks behind those in northern France, so perhaps we got off a bit lighter than our neighbours across the channel!

Even so, we were hit by a rare air frost that came in on the E - NE winds, damaging some of our vines before the buds burst. Fortunately this damage was limited thanks to our proximity to the sea and the warming influence of the River Dart, but still set us back about 3 -4 weeks as May remained cold.

Flowering in July took place in very hot and dry conditions so pollination was successful, and the rest of the growing season enjoyed above average temperatures and short sharp bursts of rainfall but nothing to really claw back the lack of spring we had so we prepared ourselves for later picking and lower yields.

Harvest officially commenced on 1st October, a couple of weeks later than usual, with Madeleine Angevine being the first variety to be picked and delivered to the winery. Although this year may not have seemed like a great summer, temperatures were still above average and this helped us to achieve some of the highest ever sugar levels recorded in our Madeleine Angevine.

Fortunately there wasn't a lot of disease present in the vineyard either and total yields hit about average, potentially enabling us to produce around 65,000 bottles this year.

Keep an eye out for our New Release 2021 which will be available both online and in our cellar door shop on Thursday 18th November. As our youngest and freshest wine, this much-anticipated release always offers a true insight into the current vintage - a taste of good things to come!

Keep up with the news 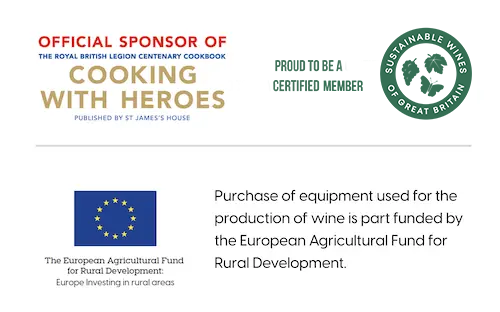 We've now closed our visitor centre for the season and will re-open on March 1st. You can still buy wine online!

Got it!
X
We use Cookies only for a better experience
To provide you best experiences, we use cookies to store and/or access device information. Consenting to these technologies will allow us to keep the site running smoothly. Not consenting or withdrawing consent however may adversely affect certain features and functions.
Manage options Manage services Manage vendors Read more about these purposes
View preferences
{title} {title} {title}